A single mother who works day and night to support her children, a young boy with dying dreams, an elderly lady content with her life, the story explores lives of rural entrepreneurs of Kalighat, Kolkata.

Kalighat in Kolkata is filled with interesting stories. It regarded as one of the 52 Shakti Peethas of India (where the various parts of Sati’s, Shiv’s wife, body is said to have fallen, in the course of Shiva’s Rudra Tandava.) Kalighat represents the site where the toes of the right foot of Shakti or Sati fell.

Legend has it that a devotee discovered a luminant ray of light coming from the Bhagirathi river bed, and upon investigating its source, they came upon a piece of stone carved in the form of a human toe.

Kalighat is also a place which flaunts uniquely small businesses. The 600-meter long walk from the main road to the mandir hosts a bustling bazaar.

What makes these shops stand out is the brassware, the conch shells, the colourful threads, sarees, and sindoor shops. The brass shops particularly give the place an Arabian mystical ethos.

The mandir has a number of pilgrims who sleep outside the temple and even cook outside. They bring with them sheep and goats for animal sacrifice and some even start their own business while they embark on their pilgrimage.

I randomly got talking to some of the pilgrims of whom two caught my attention. One was an elderly lady from Punjab who was very content with what life had to offer her and was here to thank Maa Kali by offering a goat. She has her own agriculture business in Punjab. With three sons, two daughters, and many grandchildren, her life has offered her a loving family. The other person who caught my attention among the pilgrims was a lady with gorgeous eyes from Jaisalmer.

My eyes then stumbled upon a sindoor shop. It had Red and Orange sindoor and I was always very curious about what the colours signified. A lady named Rina Devi Paswan who worked at the shop told me that the orange one was used for Bajrangbali and the red for Kaali Ma.

As the bells of the mandir continued to ring aloud and priests engrossed in their chants and the smell of camphor filled the air I continued my conversation with Rina.

Rina is a single mother who got married when she was just 12 and had her first child when she was just 15. Her husband left her when she was one month pregnant. The death of her mother four years ago was the most tragic event of her life. She said, “What Kaali Ma is to the people here, my mother was that to me.” Her father is a taxi driver and her son, a class 12 pass out works as a food delivery boy.

“I don’t like anything about this place but I have to come here for my business otherwise how will we survive. My home is here. I live here on the road, can you see that tent with sheets and plastics, that is my house. The only thing that I keep asking from God is a house,” Rina shared.

The police keep asking Rina and other temporary residents there to shift but they neither have any place else to go nor they have any money to pay the rent.

“I regret having not studied, maybe education would have helped me in today’s world but it’s too late now. I don’t mind now. I am happy because I have no choice,” Rina added.

Rina single-handedly started a business from scratch and earns about Rs. 500 on busy days. Some days she goes back home empty-handed.

“I need to be strong for my family and work very hard because I know tough days and money doesn’t last forever, but being a person of courage gets you a long way. My life is about daily survival. That’s my one and only aim. Nothing else is important,” smiled Rina with eyes that were full of sacrifice and sadness yet portrayed a lot of strength.

A few meters down the lane, a young boy named Jeetu Naskar in a Brassware shop caught my attention. Amidst middle-aged men and woman, Jeetu looked the youngest. He looked very different (in a good way) and was not really interested in my camera. He looked like a college going guy of Kolkata who was tied up by family pressure to run the business. This is what I thought initially.

When I approached him, he didn’t really want to open up but he gradually did. He worked here as an employee and was paid Rs. 300 a month. He kept smiling but did not look happy. He could speak broken English and was not willing to talk about his family.

I asked him about his aspirations and he said, “I have none. I have stopped thinking about what I want to do for my self.” He sounded very dejected.

“Money is everything today. Your dreams and aspirations bow down to money. I am the eldest son and have three siblings, my sister is married and my other two brothers are still in school. If I keep thinking about my self who will fend for them,” Jeetu shared.

He refused to talk much about his parents and told that his parents are there at home. He smiled and looked down. I asked him if he had any hobbies and he said he could sing and play the guitar.

“I bought a guitar for my self last year and I love singing. I can play many other musical instruments but I haven’t touched my guitar in the last six months. I miss it very badly. I don’t get the time nowadays,” he said.

He then took out his phone and showed me a video of him singing. His voice was amazing but circumstances made him bury his dreams. I told him that it was important to have dreams because just like good days, bad days don’t last too. He smiled and said he will give singing and auditions a thought. He even had a tattoo of Lord Ganesh on his hand. When I asked him about it, he said it was a birthday gift from his friend who makes tattoos but he said he doesn’t believe in God. Ganesh’s tattoo was the safest as his mother would shout at him less for getting one otherwise.

It was 8:45 p.m. and I had to head home and it just made me realize how fortunate I am that I could argue with my parents for some ‘time’ to find my aspirations. There are people in the world who are denied that luxury. Choosing yourself first is a luxury not many people get and keeping everything smug in your heart is a very bad idea but when life happens so many of us stop living for ourselves. We then live just to survive.

We explore small rural businesses of Falakata, West Bengal, where the villagers are selling high-quality products at meagre rates for their daily survival. 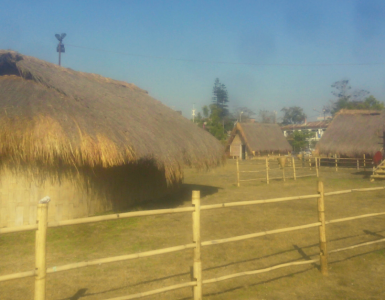 The Many Faces of Bamboo

A low-cost toilet, a cycle, beautiful huts, and many more products made of bamboo! Manipur flaunts the many uses of this wonder grass, which holds immense value to the local community.