Weaving Livelihood in the Narrow Lanes of Gajendragad

Vishwanath Kenchi, a 50-year-old weaver from Gajendragad, Karnataka spent 25 years struggling to make his ends meet. The meagre wage and poor condition of weavers made him start a handloom production business in 2007. Today, after 10 years, he has 50 looms in his units and 120 weavers work under him. His annual profit of 2016 stood tall at Rs 90 lakhs. This is how a humble weaver became a beacon of hope for the entire weaving community in Gajendragad.

Vishwanath Kenchi, a 50-year-old weaver from Gajendragad, Karnataka spent 25 years struggling to make his ends meet. The meagre wage and poor condition of weavers made him start a handloom production business in 2007. Today, after 10 years, he has 50 looms in his units and 120 weavers work under him. His annual profit of 2016 stood tall at Rs 90 lakhs. This is his story of success.

Vishwanath Devendrappa Kenchi was just 10 years old when he started accompanying his father to work as a weaver in Gajendragad, Karnataka. The master weaver would give them Rs 200 combined monthly wage. The money was certainly not enough and the family struggled to make their ends meet. While many weavers migrated and shifted to other jobs due to lack of money in the field, Kenchi continued following this traditional profession, beating all odds.

Today, Kenchi is 50 years old and runs two handloom production units. He generated an annual revenue of Rs 90 lakhs in 2016. He has over 50 looms in his unit and 120 workers from Gajendragad work under him.

How did he get from a job seeker to a job creator? And how he has changed not just his own life but also of over 100 other weavers?

The story goes back to 2007 when after over two decades of working for others, Kenchi decided to start his Co- Operative society called Adishakti Kaimagga Nekarara Sahakari Sangh Niyamita with three looms in his own house.

“I was deeply moved by the plight of the weavers. The art of handloom was gradually fading, weavers were not getting paid properly and were looking for other professions. Having faced similar challenges, I decided to support this local craft,” says Kenchi.

Initially, it was a very small unit with about 10-15 workers. For first three months, Kenchi did not receive any order.

Gradually Kenchi started receiving some orders. However, Kenchi did not have enough money to spend on transportation of the order. Every Sunday, he would keep heaps of cloth on his head and walk several kilometres to deliver them to the client. As little money came, he started taking the bus and now Kenchi takes a car to visit the market and meet the clients.

His work was recognised by Deshpande Foundation, a Hubli based organisation, which gave him Rs one lakh cash prize and also helped him get a bank loan of Rs five lakhs. He used this loan to buy land to expand the business and purchased more looms.

Deshpande Foundation also enrolled him in their Navodyami program in 2010 and gave him the much-needed guidance and mentorship.

Kenchi was exposed to a plethora of opportunities through Navodyami. He attended workshops and networked with like-minded people and potential clients.

Kenchi, who had no experience of handling a business never maintained accounts. Navodyami team helped him set up his accounting books, manage revenues & expenses, got him credit linkages and finally made sure that he has market connections in place.

He was an excellent craftsman but lacked basic business skills. This gap was efficiently filled by Navodyami.

The Rise of a Master Weaver

In just one year after his association with Navodyami program, Kenchi earned a profit of Rs 25 lakhs in the year 2011.

With this exposure, Kenchi got more workers on board and the production of his humble venture increased several folds.

“Biggest transformation we saw in Kenchi post-Navodyami was the rise of aspiration. It was wonderful to see Kenchi eventually employ a hundred weavers, mostly women as they stayed back in the village and find it easy to work at looms in the midst of their household chores,” says Neelam Maheshwari, Director – Partnerships Program & Navodyami Deshpande Foundation.”

He gets regular orders from Charkha organization along with many individual queries.

“Associating with Navodyami has given me a bigger vision. Earlier I would think of just one or two years of business. They have made me think about next 20 years and how to scale my business faster and more effectively,” says Kenchi

Kenchi’s business is now flourishing, but for Kenchi, the profit figures do not matter. He is more happy about providing employment to the hundreds of weavers, especially women.

“I believe that empowering women with a viable livelihood will not only give them a good life, but will also help our rural areas develop dramatically. Therefore, a majority of my staff are women,” Kenchi said.

For many of them it is a life-changing opportunity as they are doing it on a part-time basis with flexible timings. Many of Kenchi’s workers are women, who come to his unit after finishing their household chores.

Some of the workers are also members of the sangh who get profit dividends, besides their wages, at the end of the year.

Sudha, a 30-year-old weaver joined Kenchi’s organisation five years ago. She took one-month training under Kenchi and became a part-time employee. For her, it is an opportunity, she would rarely get anywhere.

“The unit is close to my house. Also, timings are flexible. I come here after taking care of my house and children. This would not be possible anywhere else where workers are required to strictly finish a particular amount of work,” Sudha says.

Sudha gets Rs 21 for weaving one meter cloth and she manages to weave about 60 meters in a week.

Similarly, Rekha, another weaver from Gajendragad started working under Kenchi two years ago. Her other family members too work here. “Now at least we are able to earn a steady income. Weaving is a major profession in this area, but there are not many opportunities. Here, we get regular work and get paid on time as well,” she says.

Other weavers too share the similar story. Kenchi, by providing a regular livelihood has brought major positive impact in the weavers’ community at large. With a steady income, they are now able to afford a better house, send their kids to schools regularly and above all they are able to sustain the art of creating beautiful handloom weaves.

Kenchi has come a long way. He wants to start manufacturing finished goods like shirts, pants, dresses, sarees, etc. There is a demand for more cloth and he plans to provide employment to over 1,000 weavers in next five years.

To connect with Kenchi, mail us at – thestoriesofchange@gmail.com. Click here to know more about Navodyami.

This story is a result of a month-long on the ground effort in documenting stories from North Karnataka, which has been made possible by Deshpande Foundation, a Hubli based organisation that aims to create a nurturing environment for grassroots innovations and social entrepreneurship.

The Stories of Change in collaboration with Deshpande Foundation will be coming out with more such amazing stories from the ground.

Don’t forget to check out Development Dialogues, an international social entrepreneurship ecosystem conference hosted at Hubali, Karnataka by Deshpande Foundation. This annual conference brings together over 400 delegates, 200 organizations, 200 startups and 1,000 university students to connect and collaborate over important issues of common interest. Register for the event here. 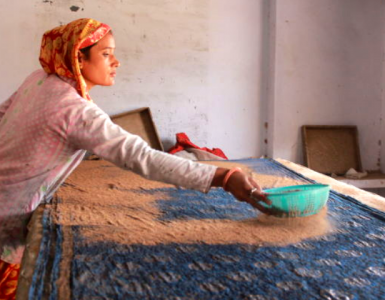