Everyday Faces: The Girl With the Pink Dupatta

With a smile on her face and balloons in her hand, Lakshmi spends each day fighting for survival as a balloon seller in the streets of Haryana. This is her story of making every day count and how you can help her in living a better life.

Lakshmi is a 19-year-old girl who sells balloon for a living and sleeps under open sky without having dinner even when the mercury drops in November. This has been the routine of Lakshmi for the last several months. She descended to Haryana’s Rohtak city from her native place in Rajasthan. She is here with over ten members from her community from Rajsamand district of Rajasthan.

The young girl with a bright face sells balloon till 10 pm at night in and around the areas like D-park, Medical Mor, Sheela by-pass, bus stand, and railway station.

“I have colourful balloons priced Rs. 10 to Rs. 40 for the customers, who buy for their kids accompanying them in the market”, she said.

Donning a worn-out Lehanga-Choli wrapped by pink dupatta says that she goes alone to sell balloons in the city in the five-kilometre stretch.

“Some male customers stare at me with piercing blue eyes, some try to touch me, other ask me to go with them for sleeping around”, she shares her pain.

She said that these are the hazards of being a lonely girl selling balloons in the streets. However, she has learnt how to brave such odds.

“I eat, sleep, take bath on the pavement right outside government buildings where deputy commissioners and who’s who of district sit-in offices to hear grievances,” she said.

Sharing an incident, she said that once she was sleeping on the pavement, a drunkard man who was keeping an eye on her for many days tried to assault her.

“I had to kick him out from the spot but these incidents are no surprises for me as it is the price of being a young girl, who has no home of her own,” she said.

Youngest of three siblings, Lakshmi said she was married off by her parents back in Rajasthan and then they came back here in Rohtak.

“My father-in-law Mittu is the eldest in our community here and he gets us balloon stock from Delhi and then we are asked to sell it off,” she said. Laxmi manages to barely earn Rs 150 every day.

“We cook food once in a day around noon time. Later, everyone gets busy in selling balloons and come back home at 10 pm and we all then sleep on the open footpath,” she added.

Lakshmi tells that they have to beg for money if they fail to earn a penny in the day so that they can cook one meal the next day.

“It’s all mixed; first I try to sell balloons but when I don’t get buyers on a rainy or odd day, I have to resort to begging in order to return to my place with some money,” she said.

Lakshmi owned one outfit that she has been wearing every day. “Some persons gave us torn out clothes to wear but that needs stitching and I am working to make them wearable,” she says sharing her elation on the second pair of dress.

The struggle of the day starts even before the dawn when she had to run to attend nature’s call in the nearby public facility at Mansarovar park. “I cannot afford to annoy anyone even to those who try to take advantage of the situation by lodging a police complaint,” she added.

“Agar police to batayengay, to gubaaray nahi bech payengay.” (If we inform police about the hostilities we face, we wouldn;t be able to sell balloons any further.)

“More than anything, I dream of having my own home where I can stay safely at the nightfall without any concerns,” she adds. She says that she does not know about government welfare schemes but believes that she is tirelessly working in a hostile environment so that the next generation can live in peace and can go to school. “I could never go to school but want my kids, when born, to attend school and buy their own house,” she said.

Reality on the ground

India has over one million or more street children in each of the following cities: New Delhi, Kolkata, and Mumbai. When considering India as a whole, there are over 11 million children who earn their living off the streets in cities and rural areas. Although adolescent girls are more protected by families than boys are, when girls do break the bonds they are often worse off than boys are, as they are lured into prostitution.

Everyday Faces is The Stories of Change series of articles where we represent the ordinary citizens of the country who are conquering each day of their life. These faces may also be in the need for some support and we are seeking that from our readers to create a change. If you have a story to share for this series, please send us an email at-  contact@thestoriesofchange.com 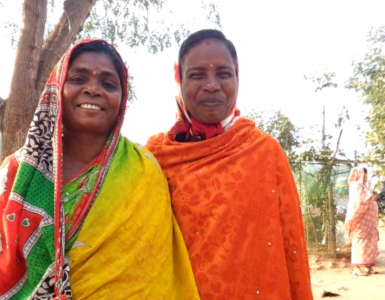 In the narrow lanes of Bhubaneswar, several women wait for hours in a hope to get some work. Leaving their children behind, Rasmita and Jhilli share what it's like having an unpredictable life of a daily wage worker.