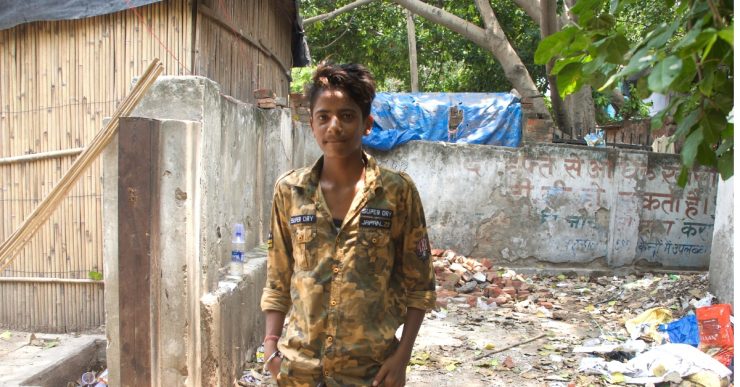 Bittu lost his eyesight due to the toxic gases inside a sewer and Hari lost his life at an age of 30. These are just a few examples of how dangerous manual scavenging is. Over 300 workers lost their lives in 2017 while cleaning sewers. Read more about the horrendous profession, the life of scavengers and possible solutions to this problem.

On the busy streets of Rohini, Delhi, just outside the government toilet on the 40-feet road, sits a group of Manual Scavengers waiting to get picked up by nearby residents to clean their sewer. With just a broomstick in their hand and wearing only their undergarments, they enter the sewer full of shit.

As disgusting this practice may sound to others it’s their source of bread and butter. The act of manual scavenging was first prohibited by the government in 1993. The ban was reinitiated in 2013 with rehabilitation measures laid out for those still engaged in this profession. However, till date, nothing much has changed and we are still counting our Manual Scavengers.

Bittu and his 17-year-old son Hritik work as human scavengers. Bittu entered this profession at an age of 16. His father too spent his entire life cleaning sewers. Not wanting his son to follow the same path, Bittu sent his son to school. However, Hritik had no interest in studies and he soon dropped out of the school. After that, he had no other choice. He did not know anything else and sadly, he too, like his father and grandfather became part of this filthy reality.

“I have lost a part of my vision. I cannot see properly because of the toxic waste that once entered my eyes. I hope my son does not face these problems.”

Hritik who has been working as a manual scavenger for about two years now says: “I earn around Rs 400 a day and I am okay with that. I didn’t want to study, I have no interest in it. If I get a better job as a cleaner at a restaurant or any hotel then that would be good for me. Lekin Jo Kismat Mein Likha Hain Vahi Hoga, Meri Kismat Mein Sewer Saaf Karna Hain Toh Vahi Sahi (Whatever lies in my fate is bound to happen. If I am destined to clean the sewage then that’s ok’ .”

Another father-son duo of Naresh and Aakash are also risking their lives every day by working this odd job. Sixteen-years-old Aakash started scavenging three years ago.

“I started doing this after dropping out from the school. I was initially scared as I once saw my father faint while cleaning the sewer. I eventually I overcame that fear,” Aakash said.

Naresh once inhaled a toxic gas due to which he fainted, luckily his friends were there to save him. But not everyone is as lucky as Naresh. Many people have lost their lives.

Despite the ban on Manual Scavenging in India, over 300 cases of deaths have been reported in 2017. The main cause of death is inhaling of the toxic gas produced from the waste.

Bittu and Naresh are lucky to be alive.  Unfortunately, Hari, another manual scavenger from Delhi did not meet a good end. Thirty-years-old  Hari’s life ended while cleaning the sewer due to the inhalation of toxic gas from the waste.

“Hari was very brave. He used to go deep in the sewer to clean it, but four years back, while cleaning he inhaled the toxic gas and fainted there. When his body was brought on the ground he was declared dead. We all were shocked at that time,” Naresh said.

Bezwada Wilson, an activist who has been fighting for the rights of the manual scavengers for years said: “Till now, the government has made very little or no progress to uplift the community. Many state governments earlier made false claims regarding the number of scavengers present in the state. The government has offered rehabilitation schemes for them. But, how can one avail the benefits of the scheme if one cannot identify himself as a scavenger? We still do not know the actual number of scavengers working in different states so how will they be benefitted?”

Since many of the workers die due to toxic gases in the sewer, Kevin Thakkar, a 19-year-old boy from Mumbai has come up with an innovation to reduce the number of fatalities in this field.

Thakkar has designed a motor, which pumps in fresh air from outside into the sewers. The device has a solar-powered LED lighting system, a toxic gas sensor, and an oxygen level sensor. This small device helps in maintaining a safe environment inside the sewer while the scavengers are working.

“I have successfully tested the machine at different sewers and it has worked perfectly in all aspects. It provides fresh air and Oxygen, bright LED light and has an alarm, which beeps when Oxygen levels are low,” explained Thakkar.

In addition, Thakkar has also been organizing free Tuberculosis checkups and health camps for the workers and their family members.

“It is a problem that violets the basic human rights. I initially designed a robot to clean the sewers, but the task is too complicated for a robot and I did not have enough resources to design that. So I came up with this affordable machine that offers a portable and a long-term solution to the problem,” Thakkar added.

Many more innovations have come in the past but what’s missing is the will to act. If the government starts funding these innovators and become serious in prohibiting human scavenging then possibly in the next two to three years, scavenging could get extinct in India.